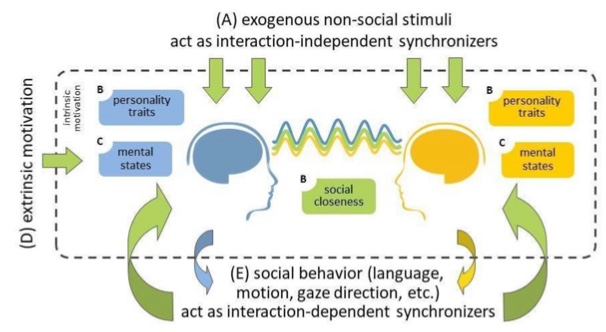 Recent years have seen a dramatic increase in studies measuring brain activity, physiological responses, and/or movement data from multiple individuals during social interaction. For example, so-called “hyperscanning” research has demonstrated that brain activity may become synchronized across people as a function of a range of factors. Such findings not only underscore the potential of hyperscanning techniques to capture meaningful aspects of naturalistic interactions, but also raise the possibility that hyperscanning can be leveraged as a tool to help improve such naturalistic interactions. Building on our previous work showing that exposing dyads to real-time inter-brain synchrony neurofeedback may help boost their interpersonal connectedness, we describe the biofeedback application Hybrid Harmony, a Brain-Computer Interface (BCI) that supports the simultaneous recording of multiple neurophysiological datastreams and the real-time visualization and sonification of inter-subject synchrony. We report results from 236 dyads experiencing synchrony neurofeedback during naturalistic face-to-face interactions, and show that pairs’ social closeness and affective personality traits can be reliably captured with the inter-brain synchrony neurofeedback protocol, which incorporates several different online inter-subject connectivity analyses that can be applied interchangeably. Hybrid Harmony can be used by researchers who wish to study the effects of synchrony biofeedback, and by biofeedback artists and serious game developers who wish to incorporate multiplayer situations into their practice.